A variety of programs may be coming to the Centennial area to address homelessness and crime in the area, officials told residents during the Centennial District 2 meeting.

This item is available in full to subscribers.

Our print publications are advertiser supported. For those wishing to access our content online, we have implemented a small charge so we may continue to provide our valued readers and community with unique, high quality local content. Thank you for supporting your local newspaper.

A variety of programs may be coming to Centennial to address homelessness and crime, officials told residents during the Centennial District 2 meeting.

Hosted by council members Christine Sweetland and Tammy Maurer, the meeting drew a crowd of about 15 people to Arapahoe Library District’s Koelbel Library on Sept. 28.

The event featured presentations by the council members, Arapahoe County Sheriff’s Office Deputy Amanda Cruz-Giordano and Amy Wiedeman, a Centennial city planner who is part of the team working on the city’s ongoing housing study.

During the presentations, council members and Cruz-Giordano mentioned future programs, some pending and some decided, that Centennial residents may see next year. 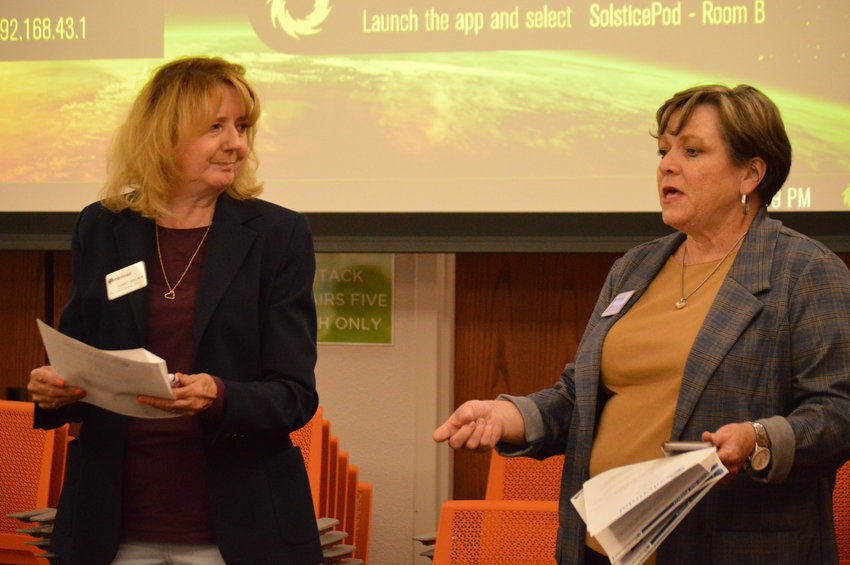 From 2020 to 2021, the number of people experiencing homelessness throughout Arapahoe County more than doubled, according to Arapahoe County’s Homeless Coordinating Committee.

“One of the things we are doing in Centennial is we have worked with Arapahoe County and we’re gonna get a homeless navigator that will be specific for Centennial,” Sweetland said.

“That person will go out and they will talk to the people in our community that are homeless and make sure that they have the resources available — give them that information,” she said.

Currently, the city is still figuring out the contracts for the position, Sweetland said.

“So, that person is not on the street yet, but come January 1, they should be,” she said. “Does that mean you’re gonna stop seeing homelessness? No. But hopefully it will help with some of the problems that we’re seeing today.” 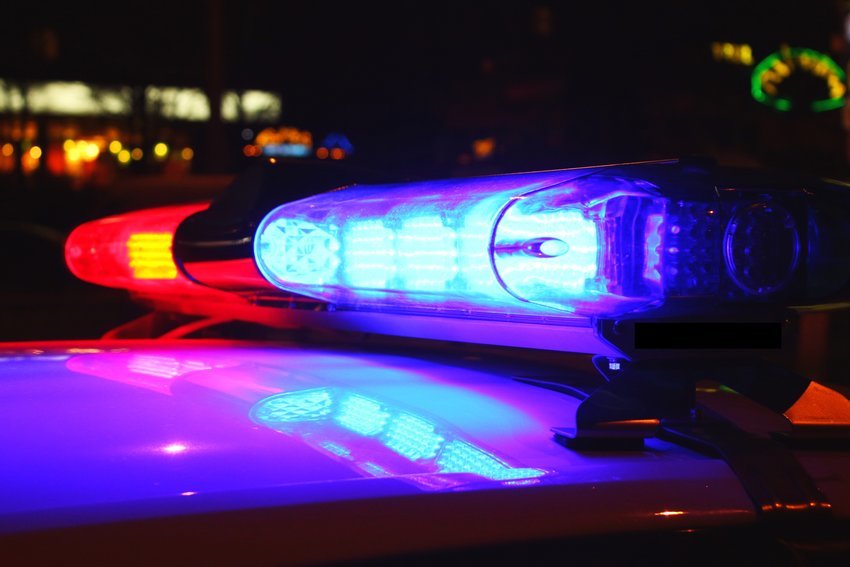 One of the pressing issues the Arapahoe County Sheriff’s Office aims to address is car thefts.

Cruz-Giordano said she spoke with investigators about commonalities in car thefts. One of the biggest things they saw was items left in vehicles, she said, such as gym bags and clothing.

“That was a big precursor, we think, to maybe why some of these cars were getting targeted — just for people to break into them in the first place,” Cruz-Giordano said.

The second precursor was unlocked cars, she said.

Cruz-Giordano recommended residents park their vehicles as close to their home as possible and in well-lit areas if possible. It’s also useful to know what one’s car alarm sounds like, she said.

If a person is going out of town and the car will be left out, Cruz-Giordano recommended letting a neighbor know and asking them to keep an eye on the car.

Beyond these individual actions, the sheriff’s office is also looking at how it can help reduce car thefts, she said.

“We are in the process of identifying grant-funded opportunities where we can look at helping people buy the clubs for their car, for the steering wheels,” she said. “They basically just fit on your steering wheel, make it very difficult to drive.”

The sheriff’s office is considering about three grants, she said, explaining the grant application period typically opens around November and closes around February.

“We’re hoping that we can get that grant written, submitted and hopefully approved so that we can start rolling out in the springtime some sort of program for our community to help them out — people that need some help in purchasing those clubs,” Cruz-Giordano said.

The sheriff’s office is also considering establishing a program to address the catalytic converter thefts, she said.

“Now, we have actually seen those go on a little bit of a decline, especially in the Centennial area,” she said. “But we’re still going to pursue that and still look at a program.”

One potential program would be setting up an etching system, Cruz-Giordano said, marking the catalytic converters so they can be tracked more easily if stolen.

Another program under consideration involves helping residents purchase a protection cage that fits on catalytic converters to prevent theft, she said.

“We do recognize that there’s a problem. We do want to try and figure out the best, most cost-effective way for you all, and for the sheriff’s office to help out with that,” Cruz-Giordano said. 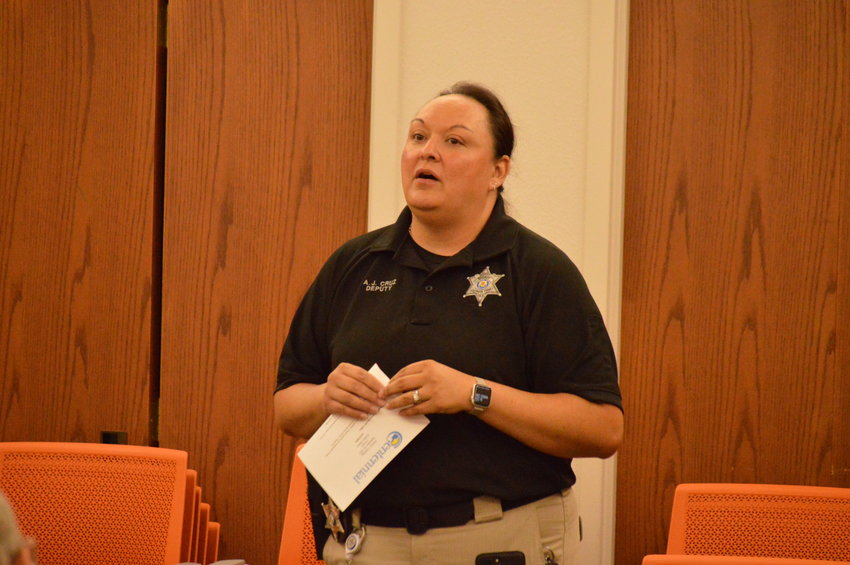 The Flock cameras are set up in specific areas and capture images of the license plates of cars driving by, she said. If there is no visible license plate, the system can use artificial intelligence to project the make and model of the car.

“What that allows us to do is it just tracks plates going in and out of neighborhoods,” she said, explaining the information is kept in a database. “And then, if we do have crimes that are occurring in a specific area, then we can pull that footage.”

Implementation of the Flock camera system is in “the infant stages,” Cruz-Giordano said, as the agency is still deciding if it wants to implement the program and where the cameras could be located.

“I can tell you that it probably would not roll out anywhere in our area here, because this is not maybe considered a high priority area,” she said, explaining the South Parker Road and East Iliff Avenue area would be a higher priority.

This year, the Arapahoe County Sheriff’s Office will participate in the National Faith and Blue Weekend, occurring Oct. 7 through Oct. 10.

On Oct. 9 from 11 a.m. to 2 p.m., the Arapahoe County Sheriff’s Office and Summit Church will host a Sunday service and community forum called “Stronger Together,” according to the agency’s website.

The event is free and open to people of all faiths. It will be held at Summit Church, located at 7200 S. Clinton St.

The forum will focus on a discussion about how to build mutual trust and respect between law enforcement and residents. Afterwards, there will be a free lunch in the parking lot.

Other items that may interest you

High school seniors reflect on life lessons from athletic careers
For high school seniors a few months from graduation, athletics have helped them prepare for the ups and downs, and the responsibilities of adult life.

Elizabeth trustees OK rezoning for growth
The Elizabeth Board of Trustees recently approved a rezoning of agricultural land to planned unit development (PUD) in the west end of the town to accommodate residential, regional commercial, mixed-use commercial, public, and semi-public land uses.

We have noticed you are using an ad blocking plugin in your browser.

The revenue we receive from our advertisers helps make this site possible. We request you whitelist our site.