From Ukraine to Larkspur: A family adjusts to life in Douglas County

This item is available in full to subscribers.

Our print publications are advertiser supported. For those wishing to access our content online, we have implemented a small charge so we may continue to provide our valued readers and community with unique, high quality local content. Thank you for supporting your local newspaper.

From Ukraine to Larkspur: A family adjusts to life in Douglas County

All of those parts of their lives were stripped away the day Russia invaded their homeland and — for the safety of their four young children — they decided to flee the country.

Maryna, 38, packed up her family's lives into two suitcases, bringing only a few items, including their work laptops and a change of clothes for each of their four children.

Now, it’s two months later and after traveling thousands of miles, overcoming challenges and marveling at examples of generosity along the way, they have found themselves in Larkspur — a 200-person town in southern Douglas County.

Their home in Western Ukraine is now filled with relatives who moved from the eastern part of the country after Russians began targeting the region. Family members are caring for the Sheveria’s pets and keeping them informed on the status of the war. Recently, they learned the bombing has moved even closer to their home.

“We kind of hoped until the last moment that bombs will not reach there,” Maryna said. “Because it’s in the mountains, it’s very small.”

Maryna and Oleksandr spoke about their family’s journey to Colorado from the living room of the the Larkspur home.

While it’s her husband and children's first time in the United States, for Maryna, it’s not such an unfamiliar place. Just down the road is Douglas County High School, where Maryna spent a school year during an exchange program 23 years ago. The Larkspur home and its inhabitants are familiar too, as it’s the same host family Maryna lived with during her exchange program.

As they spoke, Maryna translated for her husband Oleksandr, 39, who is working on learning English. 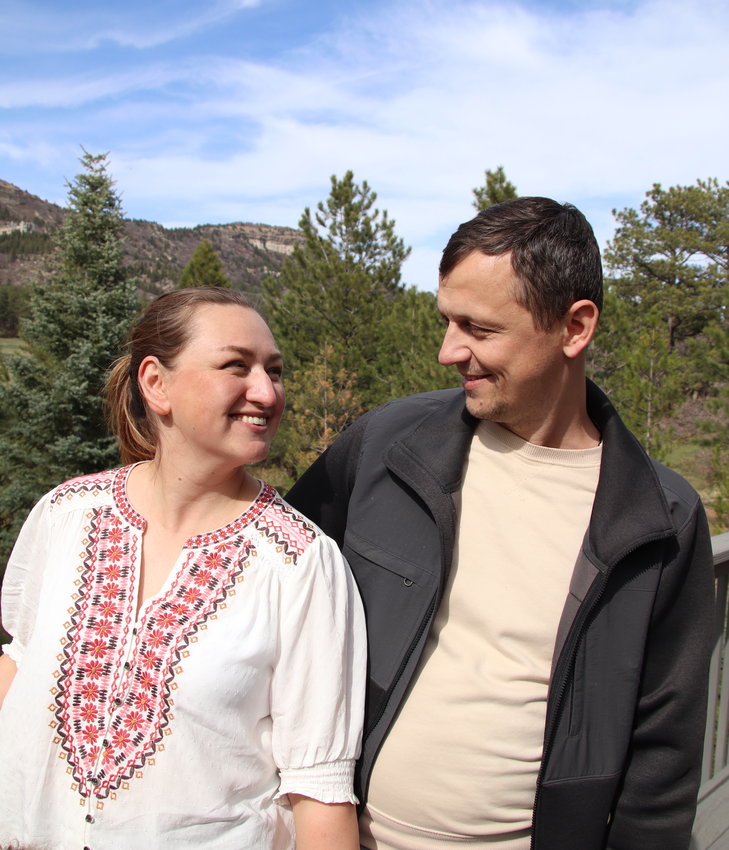 Maryna and Oleksandr Sheveria smile at each other on their new porch in Larkspur.

Just a few months ago, their family had started 2022 like many others. They had fitness goals, resolutions to learn new languages and plans for the future. On the weekends, Oleksandr would grill food for the family or they would take their kids to play at a local park.

Oleksandr owned a business selling used trucks and cars. Maryna worked for an IT company.

Then, on Feb. 24, everything changed.

“We are used to having Russian forces on our borders and they’re doing this like eight years already,” Maryna said. “We didn’t believe it until the last minute.”

The day before the invasion, Maryna dropped Oleksandr off at the border of Ukraine, where he planned to travel to Budapest to catch a flight for a work trip. After she heard the news a few hours later that Russia was attacking, Maryna called to tell him she was planning to flee.

“It was panic,” she said. “All I thought about was the safety of my children. I didn’t think about the plans for work or business.”

She gathered the kids into her car and tried to begin the journey. But she could not find any gas.

For nearly an hour, she searched for a gas station where she could fill up. While there wasn’t a shortage at that time, stations were limiting how much customers could purchase. And the lines were tremendously long.

Eventually, she filled their tank as much as possible and began driving to Budapest to meet with Oleksandr.

When they finally reconnected, the family traveled to Germany. Once there, Maryna received a social media message from Helen Kellogg, who had hosted her as an exchange student back in 1999.

Kellogg offered to again host Maryna and her family at her home. 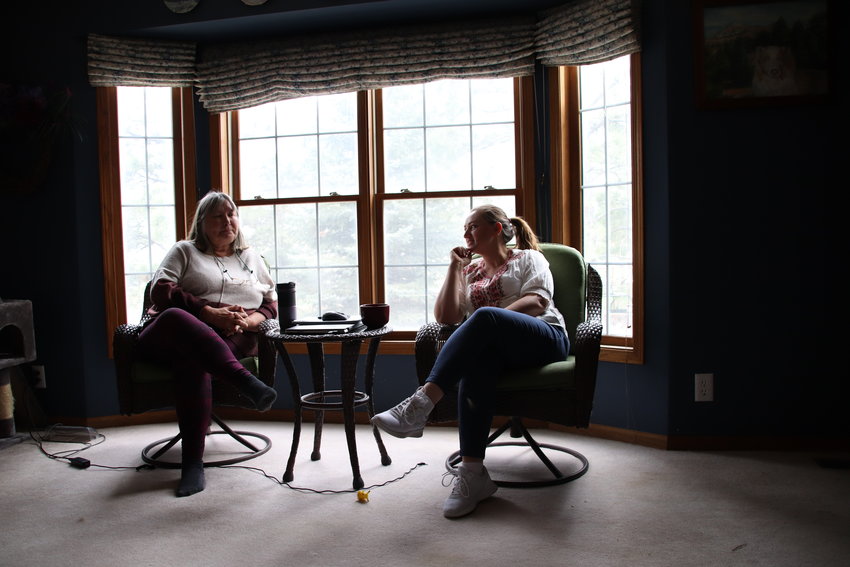 Kellogg, who is Ukrainian but grew up in the United States, began hosting Ukrainian students because she wanted to continue speaking the language, which was the first she learned.

“I wanted to kind of get back into the heritage,” Kellogg said. “My kids were young. I wanted them to be more familiar with their Ukrainian background.”

“She kept sitting there going ‘No, I need to go back home. Ukraine is going to need us, they’re going to need young people,’” Kellogg remembers. “She wanted to be part of that future of Ukraine.”

After Maryna and her family decided to accept Kellogg's offer, they spent several weeks in Germany, waiting for their tourist visa to be approved. During that time they stayed in various hostels, hotels and apartments in Germany, often experiencing generosity from strangers.

Some allowed them to stay for free in their hotel, others gave them food and one man who saw their Ukrainian license plate at a gas station insisted upon giving them cash.

“It’s been really unbelievable,” Maryna said. “I’m touched beyond words because people don’t know us. For them, we are just some family.”

Meanwhile, Kellogg, who has worked for the county government for about 37 years, asked the commissioners if they would consider supporting the family’s visa application. They agreed to do so and wrote a letter of support.

Kellogg and her husband agreed to sponsor their visa, which means they will provide shelter, clothing and food for the family.

Following an interview and a wait period, their application was approved and they flew to the U. S. in mid-March.

These days, the family spends their time mostly with each other in the house and yard in Larkspur. They don’t have access to a vehicle, so their travel around the area has been limited. They went out hiking once and also visited the Denver Botanic Gardens.

Mostly, they stay in. Maryna braids the three girls’ hair or the kids play with Pokemon toys. Oleksandr works on learning English. 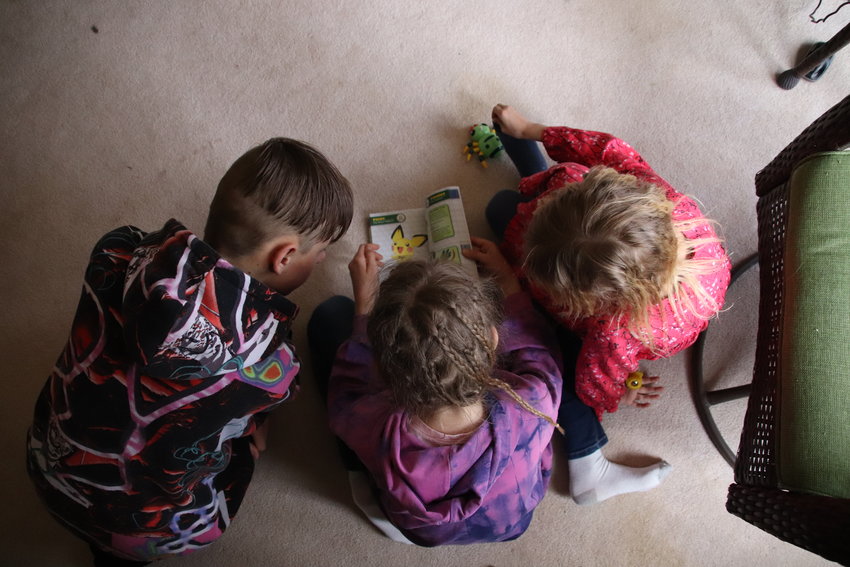 Three of the Sheveria children look at a book on Pokémon in their new living room in Larkspur. From left, Oleksandr, 14, Bodhana, 11, and Evelina, …

Since arriving, Kellogg and Maryna have tried to restrict how much news they take in from the war.

"It kinda reminds me of like 911 where you just sit there and you’re so horrified going, 'how in the heck can this be happening?'” Kellogg said.

They especially try to avoid letting the kids see or hear too much of it. While the kids know there’s a war going on, Maryna and Oleksandr try not to talk about it in front of them.

“I’m happy they didn’t see anything like a lot of children had to witness in Ukraine,” Maryna said. “They are ok. They haven’t been traumatized that much.”

For Mayna and Oleksandr, there are some complicated emotions that cross their minds as they wait to see how the war will play out.

“At first I kind of felt guilty that I left the country. But I usually stop myself from that thought when I start feeling like that because I look at my children and I understand that it was the right decision,” Maryna said. 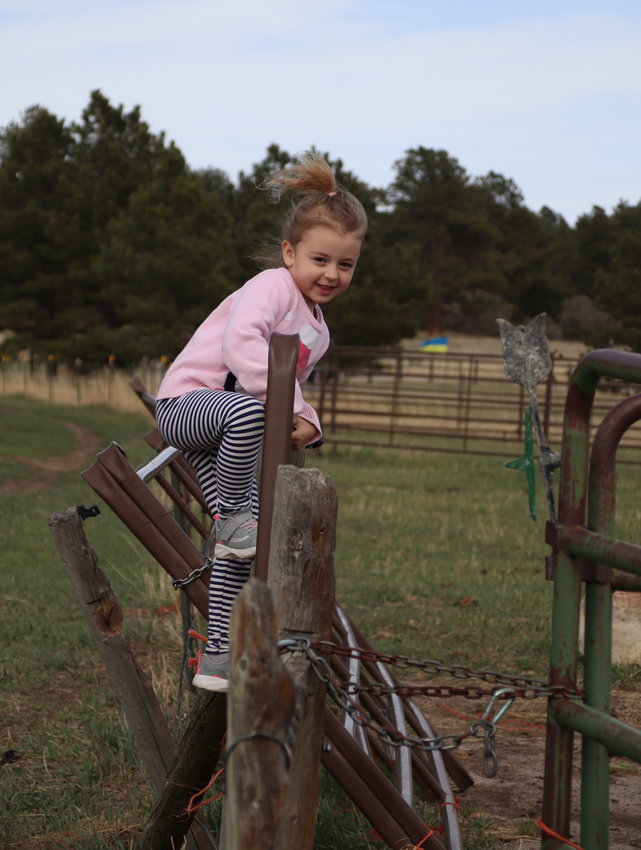 4-year-old Taisia Sheveria sings while climbing a fence in Larkspur. Behind her, a Ukranian flag waves.

Both Maryna and Oleksandr’s parents are still in Ukraine along with their siblings, friends and other relatives. With some, they are still in touch and hear consistent updates about the state of the war. Others, they can’t contact and don’t know where they are or how they are doing.

For now, the couple can’t work because of their status as tourists. They have applied for Temporary Protection Status from the U.S. and hope if it’s approved, they will be able to begin working in the community.

“I miss the regular life, when you go to work, when you talk to people, just a regular schedule,” she said.

If that status is approved, perhaps they can buy a car and find a place to rent.

“We’re really thankful to Helen and Jim for hosting us here because it’s a big support on their shoulders,” Oleksandr said with Maryna translating. “It means a lot to us.”

All they can do until then, however, is wait.

The kids, ages 4, 8, 11 and 14 and are currently learning remotely in a Ukrainian school but if the family is granted TPS status, they hope to attend local classes.

“We can’t make any long-term plans at the moment because of this situation,” Maryna said. “Hopefully things will get better in Ukraine.” 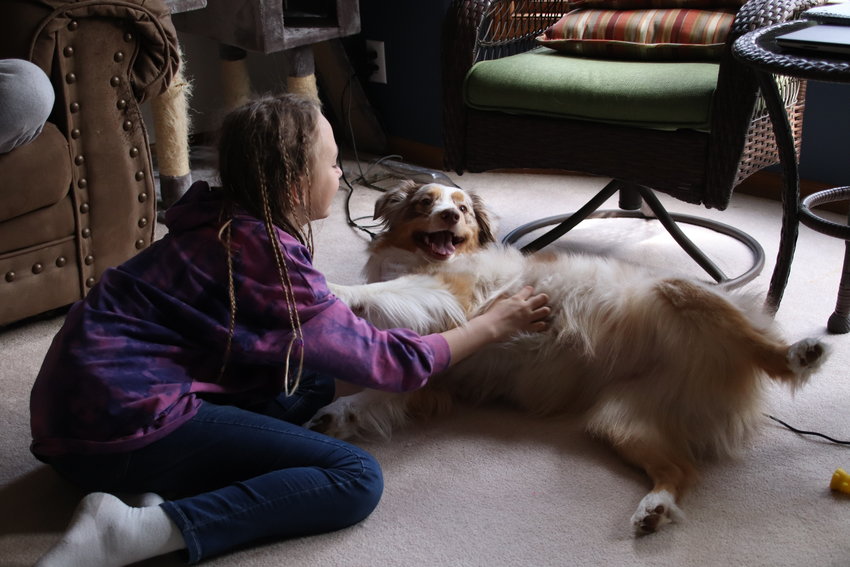 Bohdana Sheveria, 11, has cried often since her family left Ukraine because they had to leave their dog and two cats behind, her mother said. Since …

Other items that may interest you

New VA Clinic to be built in Castle Rock

For Girl Scouts, cookie sales generate a sense of accomplishment

Health care giants form one insurance company
By some measures, the Denver metro area has one of the most competitive hospital markets in the country. Large health systems duke it out every year for supremacy in the multibillion-dollar …

Colorado may end age-discriminating work question
Asking someone their age is considered impolite. But asking a job candidate? That’s perfectly legal. A bill at the state legislature would change that, at least in Colorado, and prohibit companies …

We have noticed you are using an ad blocking plugin in your browser.

The revenue we receive from our advertisers helps make this site possible. We request you whitelist our site.